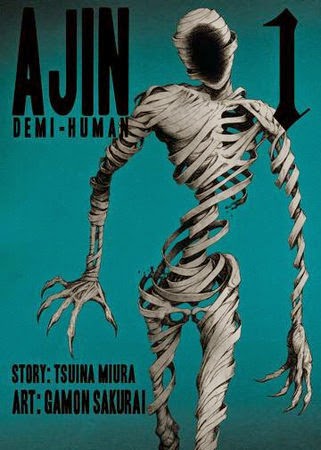 "Do demin-humans only become demi-human after they die once? Or are they born that way?"

Kei Nagai is a regular high school student.  He studies hard so he can become a doctor.  He is an obedient son and a good brother.  One day he gets hit by a truck and dies.  And then he gets up and realizes that he is one of the "demi-humans."  Demi-humans were discovered 17 years before, they are immortal.  They can die over and over again and come back to life.  There are 46 known demi-humans in the world, or there were this morning.  Now there are 47 and Kei is on the run.  Every government in the world wants to get their hands on the demi-humans.  They are seen as valuable test subjects and experimented on.

This story is great.  The story takes off immediately and drags the reader along with it.  Kei is on the run from the government.  The government is desperate to find him.  There is a strange man in a hat with a creepy smile watching people rush around frantically.  What on earth are these strange black mummy looking things?

I really enjoyed that this story didn't travel down the tired old "I'm immortal, I must be a superhero charged with saving the world" path.  This is much darker and I love it.  This series seems to be playing with the very definition of humanity.  What makes someone human?  Is someone who is different somehow not a human?

Regular immortal superheroes are a stretch to my mind.  No government in the world is going to look the other way and let someone who can't die or who has super strength or who has x-ray vision roam around doing what ever they want.  I am much more inclined to believe that every government would be fighting to get their hands on and experiment on someone that appears to be immortal.

I can't wait to see what is in store for the next volume of this manga.  I recommend this one very highly.  It is fairly graphic, he gets hit by a truck in the first chapter and that is only the first time Kei dies, so there is gore and there will probably be a whole lot more before this series ends.  The story moves at a good pace and I have to say the ending leaves the reader wanting more!
Posted by Unknown at 11:27 PM

In a nutshell, I am 31 and a stay at home mom. I have been reading as long as I can remember. I am raising my son to be a voracious reader. My house is full of books. If you want more information about me please check out this post!

Some of the books reviewed on this blog were sent to me for free by the publisher or a third party for reviewing purposes. Any reviews of books received free will be clearly marked as such. My reviews are my honest opinions regardless of how I acquired the book.